UNION, N.J. — Architectural studies student Santiago Rada will graduate from Kean University this May with an impressive resume of projects he worked on as an intern for the Office of Campus Planning. That list includes a major redesign of the patio at Kean House, the president’s residence on East Campus. 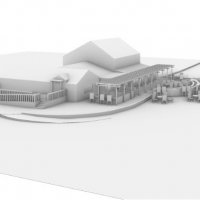 The stunning, two-level, 6,000-square-foot stone patio, completed in July 2021, features seating areas, a full outdoor kitchen and pergola, and, as its focal point, a 30-foot raised fire pit. It has ADA accessibility on both sides, and sound and lighting systems are integrated into the design.

Rada, as part of the project design team, created 3D renderings and assisted with multiple tasks as the project went from the planning stages to execution. The Kean senior from Elmwood Park used design programs such as Rhino and Lumion to create the patio designs and decipher which were best suited for the space.

“Kean has definitely prepared me for these projects. I was able to learn how to use critical thinking and creativity, how to design with a motive, and most importantly, how to express my ideas through drawing and hands-on work,” Rada said.

Kean President Lamont O. Repollet, Ed.D., uses the residence for official functions and welcomed faculty and staff to the redesigned patio in a series of Open Houses last fall.

“The design team did a remarkable job on the Kean House patio, creating a space that is attractive and welcoming for all events that are held there,” Repollet said. “Having a student involved in creating the design demonstrates Kean’s commitment to giving students opportunities to put their skills to work in a professional setting and gain experience to help them in their careers. If this isn’t real-world experience, I don’t know what is.”

Steven Remotti, vice president of campus planning, said from the start, he wanted Rada involved in the project.

“From the moment we thought of creating this magnificent project with amazing potential, Santiago was the first person who came to mind," Remotti said. “We knew that as we captured our thoughts, Santiago would bring them to life. With his creativity, imagination and skill set, we designed a unique, world-class patio.” 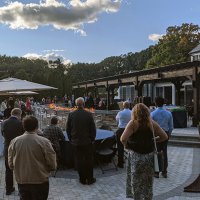 Other Kean projects Rada has contributed to include Kean’s Alumni Stadium and East Campus Gym. He said each project gave him a chance to develop important architectural skills.

“While working on the Kean House, I was able to learn most importantly about material choices and how they work together,” said Rada.

In 2019, Rada also went on a service trip to Puerto Rico, sponsored by the Human Rights Institute, where he helped rebuild houses after Hurricane Maria.

“I learned the reason so many houses did not withstand the hurricane, and it allowed me to think of better ways to prevent the extreme damage that was caused in Puerto Rico,” he said.

“To have your work on display in such a prominent location at such an early stage in your career is an amazing first professional opportunity,” Konyk said. “Santiago is on a forward path to make the world a more livable and beneficial place to inhabit.”

Rada currently works as a designer with WHY Architects in New York.