"The League of Women Voters of Northern Valley invites the public to attend this virtual Meet and Greet and learn about the League's priorities, available voter service resources, and opportunities to get involved in the organization's efforts.  Find out about the League's extensive hands-on programs, including The Advocacy Training Program, The Lobby Corps, Get Out the Vote, the Slack and Outreach Circle, and available committees to join," said Joyce Luhrs, Vice President of Marketing, League of Women Voters of Northern Valley. 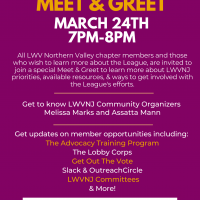 Founded in 1920 by leaders of the women’s suffrage movement and six months before the 19th amendment was ratified, giving women the right to vote, the League has empowered citizens to shape better communities through information and advocacy.  The League remains non-partisan and does not support political parties or candidates.  The organization works to protect and strengthen democracy by educating the public and urging citizens to participate in the political process by becoming informed voters and active in all levels of government.

For further information about the LWVNV, membership or to get involved in voter service activities, contact lwvno.valley@gmail.com.  Learn more about the LWVNV on the organization’s website, bit.ly/LWVNVinformation.

About League of Women Voters of Northern Valley
The League of Women Voters of Northern Valley, a chapter of the League of Women Voters (LWV), is a non-partisan, grassroots civic organization that encourages informed and active participation in government, works to increase understanding of public policy issues and influences public policy through education and advocacy.  The LWV was an outgrowth of the 19th Amendment passed in 1920 giving women the right to vote.  Today, the LWV operates at the state and local levels through more than 700 state and local Leagues in all 50 states and in Washington D.C., the Virgin Islands and Hong Kong.

The organization develops grassroots leadership and achieves widespread credibility because it is strictly nonpartisan.  Throughout the year, a range of voters services and programs are provided, including candidates’ forums, registration drives, dissemination of nonpartisan information about candidates and issues, and public meetings to discuss current issues.