UNION, N.J. —  For the second year running, a private foundation with a history of supporting higher education and the teaching of urban design will offer a $10,000 innovation prize to be shared by top students at Kean University’s Michael Graves College School of Public Architecture.

The 2022 Donald Rappaport Prize, funded by the William and Lia G. Poorvu Family Foundation, will divide the $10,000 gift among several Kean architecture students in recognition of conceptual projects of their own design. A jury of faculty members will select the winners, whose names will be announced in May.

“I thank the Poorvu Foundation for its generous support of our talented architecture students,” said Kean President  Lamont O. Repollet, Ed.D. “This prize from such a respected organization recognizes the School’s mission to take architecture to a wider public audience and aligns with Kean’s status as New Jersey’s first urban research university.”

"This award supports students in the School of Public Architecture at Kean University, in particular for their focus on how architecture engages with the public world around us,” he said. “It is a wonderful marker for our young program.”

The prize at Kean is named for the father of Nina Rappaport, the history/theory coordinator at Kean’s architecture school. Her father, Donald Rappaport, served as chief financial officer and chief information officer for the U.S. Department of Education under President Bill Clinton.

It was through the donors’ friendship with Nina Rappaport that they became aware of Kean’s growing architecture program, established in 2015.

"It is important that we provide recognition and support for talented young architects trying to emerge in a competitive environment,” said William Poorvu, of the Cambridge, Massachusetts-based foundation.

The foundation has previously contributed to educational programs in architecture and urban design at Harvard and Yale universities.

“I am so thrilled that our students in the School of Public Architecture are recognized for their outstanding work with this competitive prize,” Nina Rappaport said. “The prize will allow students who complete innovative, mixed-use design projects for a public urban site to pursue their dreams and their own projects.”

In May of 2021, the prize’s inaugural year, awards were given to three students. A graduate award of $5,000 went to Charles Raimondo ’19, of Edison, for Mast Remediation, a phased project for Bridgewater, New Jersey incorporating public, commercial and residential uses with brownfield remediation. Two students who went on to graduate in 2021, Mack Cyran, of Carteret, and Joseph Vazquez, of Newark, were jointly awarded $2,500 each for Connections, a design for a site in the heart of Newark that combines residential, commercial and community uses. In addition, the foundation gave the pair of undergraduates an extra $1,500 to support their continued work on their project over the summer.

Raimondo used the award money to create his “Edison Maker Space,” ordering a do-it-yourself 3D printer and adding a 2-by-4-foot laser bed to his laser cutter. “The new equipment has allowed me to help current architecture students by providing parts for models,” he wrote in a letter to Kean. “I have also been able to help several local small businesses with keychains, action figures, signage and marketing materials. It brings me great joy to be able to assist the local community and bring people’s visions to fruition.”

Both Cyran and Vazquez found enormous value in the summertime award that allowed them to revisit and revise a project started earlier in their time at Kean.

“I wanted to make it a truly sensitive revision that takes a more focused and serious approach to the relation our proposal has to historical Newark and the site,” Cyran wrote. “I believe the result came to be a proposal of integrity and beauty that would positively impact its community.”

Added Vazquez, “When I place the two iterations side by side, I reflect on how much I have grown as a designer, as a thinker and as a student. I have now received more motivation to learn about how architecture can be pushed (forward) with new knowledge. I have also gained motivation to continue my education at Kean University and pursue my master’s degree, so I can be eligible to become a licensed architect.” 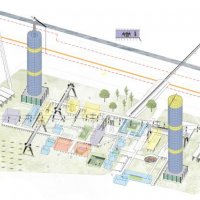