RIDGEWOOD—Troop 7 Ridgewood will recognize three Boy Scouts that have achieved the prestigious rank of Eagle — Zack Boesch, Nick Galis and Kalyan Patel — on Saturday, June 11 at 2:00 pm at Upper Ridgewood Community Church. Eagle is the highest rank awarded by the Boy Scouts of America. Nationwide, over the last decade, about 8 percent of all Boy Scouts earned the Eagle rank.

One of the requirements to earn the Eagle rank is to complete a significant project that is done in service to others. The Scout must identify, plan, execute and document the project with a final report. During the project, the Scout must demonstrate leadership by recruiting and managing people to support completion of the project. 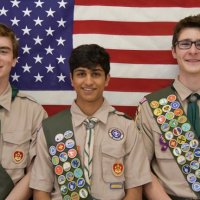 Since Upper Ridgewood Community Church is home to Troop 7, Zack Boesch chose to beautify the grounds by creating a contemplative garden with a Peace Pole as the centerpiece. The eight-foot-high pole features the words “May peace prevail on Earth” written in eight different languages. Zack and his team of volunteers also mulched the garden and planted a variety of evergreen shrubs. A weather-resistant bench faces the pole, allowing members of the church and the neighborhood to sit and enjoy the tranquility of the space. Zack’s project was completed in January of 2022, a few weeks before the Russian invasion of Ukraine. He was happy and grateful that members of the congregation were able to gather in the garden after Sunday worship to pray for peace. 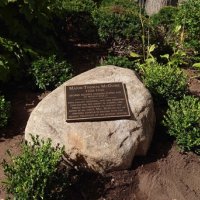 An avid aviation enthusiast, Nick Galis has visited numerous air and space museums throughout the years. A name that always stuck out to him was that of Major Thomas B. McGuire, for whom McGuire Air Force Base is named. A native of Ridgewood, McGuire was a war hero and Medal of Honor recipient who died saving a comrade over the Philippines in 1945, scoring the second-highest number of enemy aircraft downed of any U.S. Air Force member during World War II. After reading a New York Times article from the 1980s lamenting the lack of memorials in Ridgewood for the hero that the town spawned, Nick decided to work with local American Legion Post 53 to create a memorial to honor McGuire’s impressive legacy. Choosing Van Neste Square as the location, Nick and the Legion worked to plan, together with the town, the location and arrangement of the monument. It was completed in October of 2021. 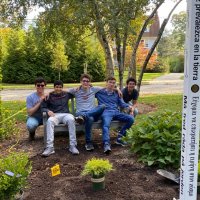 Kalyan Patel wanted his Eagle project to address one of the consequences of the COVID-19 pandemic. In his search for a project, he was directed to Sue Ullrich, the activities director of Ridgecrest, a housing community in Ridgewood for low-income adults age 62+ and people with disabilities. To combat the feelings of isolation that many seniors at Ridgecrest had, Kalyan created a sensory garden in the main courtyard of the apartment complex. Prior to the workday, he had recruited seven of his fellow Scouts, and together they completed the installation within several hours in May of 2021. The project could not have been completed without the help of Mike Tarleton from TLC Landscaping, who donated his time and wisdom throughout the workday. The final result brightened up the courtyard and could be seen by many seniors from their windows. Kalyan was later told that the project brought a smile to the faces of many residents. 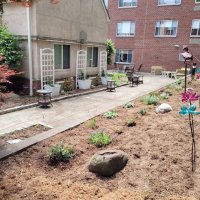 All three projects created lasting improvements to the community. In addition, they provided the Scouts with the opportunity to gain experience typically not offered by other extracurricular activities. The Scouts wish to thank the project sponsors, mentors and volunteers that not only made these projects possible, but also their journey through Boy Scouts that led them to achieve the rank of Eagle.
Rating: 0.00/5 (0 votes cast)