(SCOTCH PLAINS, NJ) – Craig Clark, 61, is taking time to reflect on the gift of life and the miracle of organ and tissue donation and transplantation as he recently celebrated four years since his life-saving heart transplant. 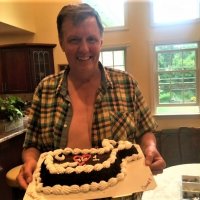 With his health and strength now restored, Craig is living each day to its fullest by enjoying life’s precious moments and spending time on his favorite hobbies, including home improvement projects, day trips and travel.

“Each day that I get to travel and spend time with extended family and friends or special events like our children’s weddings or the birth of a grandchild, I remember that it was made possible thanks to my organ donor and the care of Susan Pardi, NP, and the amazing transplant team at NYU Langone who kept me alive through heart failure,” said Craig.

Now four years post-transplant, Craig is filled with energy and spends as much time as possible with his grandchild. He is also forever mindful of his organ donor who gave him the gift of life. “The only thing that I know about my donor is that he was 51 years old when he passed,” said Craig. “My donor or his family’s decision to be a donor has essentially given me a new lease on life.”

Craig has also made it a priority to advocate for NJ Sharing Network, the nonprofit organization responsible for the recovery and placement of donated organs and tissue in the Garden State. By sharing his story with others, Craig hopes to encourage more people to register as organ and tissue donors. “One organ and tissue donor can save eight lives and enhance the lives of over 75 others,” said Craig.

At the age of 17, Craig enlisted in the U.S. Marine Corps. He earned bachelor’s degrees in Criminal Justice and Art History from Seton Hall University before returning to active military duty as an Artillery Officer. At that time, doctors detected that Craig had a heart murmur, and he was soon diagnosed with cardiomyopathy. Despite his critical health challenges, Craig and his wife, Anna, raised their three children, Adam, Rachel and Nathan, and he enjoyed a successful career in transportation and supply chain management.

As years passed, Craig’s heart disease grew progressively worse. He suffered a stroke and his heart stopped beating twice in a two-week period. Craig had a defibrillator implanted, but he was later diagnosed with congestive heart failure (CHF) in 2017. He was added to the heart transplant waiting list. On August 25, 2018, while admitted at NYU Langone, Craig’s prayers were answered when he received “the call” from NYU Langone cardiologist Alex Reyentovich, MD that a heart was available for transplant.

“I remember answering the phone was basically the only thing that I had enough strength to do at the time,” said Craig. “The next day, I had my transplant. I recovered quickly in the immediate days and weeks after transplant. I was out of the hospital in just seven days!”

Currently, there are over 100,000 Americans – nearly 4,000 of whom live in New Jersey – waiting for a life-saving transplant, according to United Network for Organ Sharing (UNOS). However, the generosity of those in the Garden State is providing hope for the future. Organ and tissue donor registrations in the Garden State continue to increase thanks to strong community education and outreach efforts and simplified ways to register. To learn more, get involved and register as an organ and tissue donor, visit www.NJSharingNetwork.org.